EMS training: When in London, do as the Germans do and for good reason.

Read on to learn all about EMS training and exactly what I experienced during my first session with E-Pulsive, one of London’s very first EMS training companies.

Learn all about EMS training and exactly what I experienced during my first session with E-Pulsive, one of London’s very first EMS training companies.

What does EMS stand for?

What’s the history on EMS?

EMS training has been around for centuries. But the sort of EMS training that’s you’ll come across nowadays will be a tad more sophisticated than the first electromagnetic induction stimulation device created in the 1900’s.

Much research and progress  has been carried out on EMS training and it first proved useful to physiotherapists who learned that the electrical impulses alleviated back problems such as scoliosis.

What does EMS do?

Why does it do it?

When we exercise, our bodies are constantly sending electrical signals which travel along our nerves to our muscles to tell them to get moving. This is in thanks to our central nervous system. However, EMS training takes this to another level by creating an external and controlled contraction of the muscles that delves even deeper.

So, not only is this a positive for those in need of physiotherapy, it was discovered that it’s benefits reached further, including weight loss, increases in strength, and the tightening of connective tissue.

Doubtful? I was too. But when I met with Mario Kaspers, co-founder of E-Pulsive, one of London’s first EMS training companies, he quickly diminished my doubts. A native German, Mario explained that EMS training has gained widespread use throughout his homeland over the years.

We all know the German’s know a thing or two about pretty much everything, so chances are if there is a workout with a fitness following there, it might be more than just a passing fitness fad. What’s more is that Universities and medical centres have done their fair share of research on EMS testing. It seems to be the real deal.

You won’t need to use as much weight to create an effective strength workout, which will significantly resude risk of injury. Oh, and you are working 350 of your 640 muscles and contracting them an average of 36,000 times, making your 20 minute workout as effective as a three hour one.

What was my first session with EMS training like? 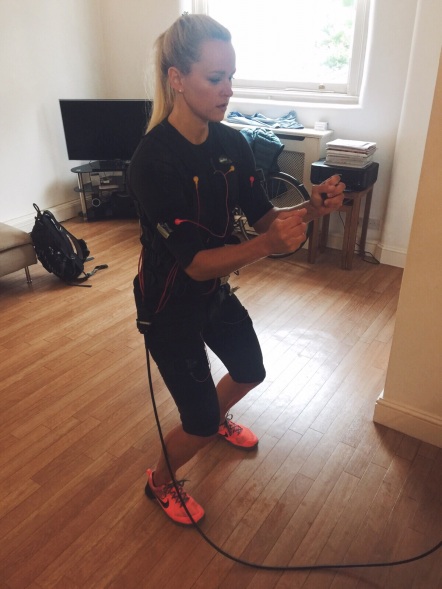 Some reviews say the electric muscle stimulation is hardly noticeable, but I would say quite the opposite.

After putting on a cotton top and bottoms that were sprayed with water to help with the conduction of the electrical current, Mario then carefully strapped me into the EMS suit.

He then explained that the Miha BodyTec II machine would be turned on, which controls the stimulations sent to the muscles.

Mario began to slowly turn each muscle group “on,” beginning with my quads. I instantly felt an odd tingling sensation. Soon the electric stimulus was up to 50% and the tingling turned to a slight pinching sensation. It was freaky to say the least, but as I began to relax so did the little shocks of electrical current.

Once I felt my quads were engaged and feeling the impulse to a great enough degree, it was my time to turn on the glutes. Yet again, another very weird sensation, and after switching on each knob and covering all major muscle groups, I was ready for the actual work to begin.

I started with a light jog, and within minutes what is essentially the easiest of movements had me in a sweat. Mario kept the conversation going, and as much as I wanted to converse and learn more about the EMS training, I found myself only able to let out a sentence or two at a time before needing to catch my breath again.

In all honesty, it felt a bit painful at first. I have tried workouts like Power Plate, which I love, but the electro impulses places on each major muscle group during EMS training was a stimulus like no other.

After ten minutes of going through the cardio training with EMS, we then went into ten minutes of strength, which meant a slight change in the way the impulses are sent to the muscles and doing exercises that could include weights. While I love a good strength session, holding any sort of weight during my first session was just not going to happen.

In the end, I was a sweaty mess. And while those 20 minutes felt extremely foreign, it was still a great workout.

I am constantly seeking out sports massages and other ways to iron out the tightness and kinks in areas such as my back. What’s great about EMS training is that the electric impulses are evenly distributed to each muscle and you are essentially having a physiotherapy session whilst also getting a quality workout.

You’re working each muscle in a balanced format, getting a full-0n workout in as little as 20 minutes and, in using less weight, you are at very little risk for injury.

Its pretty obvious the Germans are onto something with EMS training, and it’s about time London has caught on.

View all posts by Victoria Engelmann

1 comments on “EMS training: When in London, do as the Germans do and for good reason.”